In October 2019, Friends of the Island Fox funded a research study by Stacy Baker and Juliann Schamel, via a donation from Safari West, to investigate the use of cementum analysis as a method to determine island fox age at death. The results are in and the answer is, well mostly yes, but...

To conduct the analysis 31 teeth from island foxes, whose age was known when they died, were sent off for testing. Of the 31 samples, 28 were aged accurately to within 1 year of their known age, two teeth were underestimated by 3 years and one was underestimated by 4 years. This underestimation primarily occurred with older foxes.

The data suggests that for younger and middle age foxes–up to approximately age 7–cementum analysis can provide an accurate assessment of age at the time of death. (A more accurate assessment than estimating age by tooth wear.) For more senior island foxes, however, the accuracy of the method drops significantly. 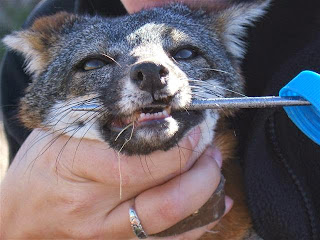 What are the factors that led to a misread of the older fox teeth?

According to Baker, the study's principal scientist: "Tooth condition may perhaps play a role, as two of those teeth out of four were determined to be of lower quality for aging according to the Matson's Lab. This also may be unavoidable, since broken and decayed teeth become more prevalent as individuals age." (Matson's Laboratory in Manhattan, Montana, specializes in aging mammals using teeth.) With the limited sample size from the older fox population, more analysis is warranted to tease out the factors that may play a role in the reading error. In the wild, foxes are known to live 10–12 years on some islands. (K Dearborn personal communication)

Friends of the Island Fox is committed to research that will expand understanding of island fox biology and behavior. The more we know about island foxes, the more we can protect their future. It's Science for Fox Sake! - Mike Watling, FIF President

This research project was made possible through Friends of the Island Fox, a donation from Safari West, and in partnership with the National Park Service, Santa Barbara Museum of Natural History, and UC Davis.

Posted by Friends of the Island Fox at Tuesday, October 19, 2021