How Structures in Teeth Could Provide Accurate Age Information for Island Foxes? 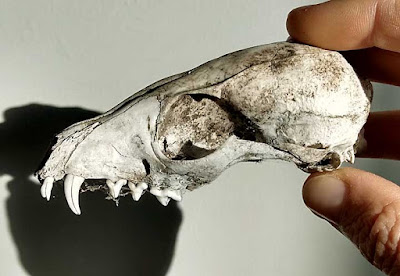 In October 2019, Friends of the Island Fox funded a research study, via a donation from Safari West, to investigate the use of cementum analysis as a method to determine island fox age at death. The current standard method for estimating age in island foxes is based on the wear of the upper first molar. This method is imprecise as tooth wear is heavily influenced by diet and varies significantly between islands and even among habitats on the same island.

Knowing the age at death is very valuable as it allows the National Park and other island managers to track the island fox lifespan. This is important as a fox who dies at age 9 or 10, after reproducing for many years, has contributed to the survival of the species. A fox that dies at 3 or 4 may not have had a chance to replace itself in the population or pass on its genes.


Cementum is a thin mineralized tissue covering the root surface of teeth and functions as a tooth supporting device which anchors the tooth in the socket. Unlike bone, cementum is produced throughout one's life and forms annual layers (annuli)–a fact that makes it useful in aging techniques.

Cementum Analysis
To determine the age of an island fox after it has died, the lower canine tooth is removed and sent to the lab for aging.


Once the tooth is received at the lab it is cleaned to remove any dirt and soft tissue, then undergoes processing to decalcify the tooth in preparation for analysis.

This makes the tooth very soft and pliable. The tooth is then preserved by fixing it in formaldehyde, also known as formalin, to preserve proteins and vital structures within the tooth. Next, it is embedded in a paraffin wax block which provides a support medium to make it easier to cut thin slices for examination.

The paraffin embedded tooth is cut into sections, approximately 15 microns thick (about the size of a droplet of mist or fog) on a device called a microtome, which is very similar to a deli slicer. The thin sections are mounted on glass microscope slides as the final step prior to analysis.


The sections are stained with a special histological dye that is taken up by annuli at varying degrees (light blue or darker blue) depending on the amount of cementum laid down in a given year. This provides both a highlight and contrast for the purposes of counting the number of growth rings (aging) under a microscope.

The picture of cementum annuli in the photo below indicates the growth rings with the black arrows.
Significance
If it is possible to accurately determine a fox's age at time of death, it can be used to monitor average longevity and to investigate many questions across all six of the Channel Island. Questions such as:
Friends of the Island Fox is committed to research that will expand understanding of island fox biology and behavior. The more we know about island foxes, the more we can protect their future.

Posted by Friends of the Island Fox at Thursday, January 09, 2020