Investigating the Relationship Between Island Foxes and Island Spotted Skunks 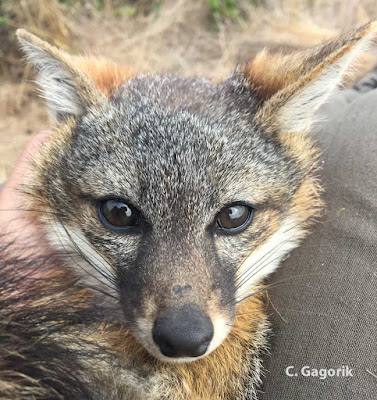 Islands typically support few terrestrial, or ground-living, carnivores due to the challenges of traveling over water to arrive on islands. On Santa Cruz and Santa Rosa Islands we have the rare occurrence of  two insular carnivores: the island fox and the island spotted skunk (Spilogale gracilis amphialus). 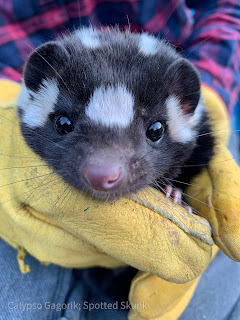 How the skunk got to the islands remains unclear, yet evidence has shown they have existed with the foxes for at least 7,000 years. (Fox arrival on the islands)

The spotted skunk and island fox are rivals, competing for the same resources in the form of aggression and predation. Averaging 3–4 lbs on the northern islands, the island fox is the larger and more dominate species. Island spotted skunks are about half the size. However, there is little understanding of when and where these two species interact. 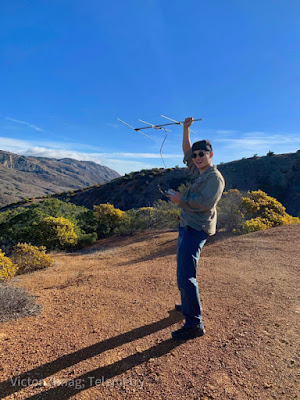 In 2020, Friends of the Island Fox provided some funding to aid in a better understanding of the activity pattern of skunks and foxes on Santa Cruz Island. (More on FIF Research Grants)

Modern Global Positioning Satellite (GPS) collar technology can now capture additional information from wildlife that was not previously accessible–including accelerometers, which measure the forces of active movement. In this study, several foxes and skunks were fitted with GPS and accelerometer enabled collars to map the movement of each species with the aim of revealing the environmental factors that are most important in driving the fox's activity, such as changes in temperature, reproduction, and/or competition.

Calypso Gagorik, the project's principle investigator, says: "Given that the spotted skunks are strictly nocturnal, the chance of fox-skunk encounters may be entirely driven by changes in daily fox activity patterns."
The map below shows the GPS data points of one spotted skunk and one island fox that have overlapping home ranges. (Red dots represent island fox locations and Blue indicators are island spotted skunk locations. Skunk locations are taken less frequently because the batteries on their collars are considerably smaller. Each GPS location mark requires battery use.) What still needs to be analyzed is whether the fox and skunk were active at the same time of the day. 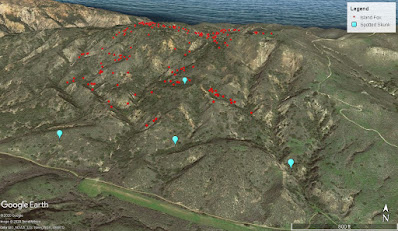 The importance of this research according to Gagorik, is "if foxes and skunks utilize similar area, but are active at totally different times, then the chance of interspecific interactions may actually be quite low." In other words, an island fox might visit a water source during the day, while the island spotted skunk might drink from the same location at night.

Previous accelerometer data that was collected in 2019 have informed Gagorik and, fellow researcher, Victor Zhang "that the timing of daily fox activity varies greatly across the year, and the current analyses (completion summer 2021) will aim to reveal the environmental factors that are most important in driving changes in fox activity timing." Island foxes may be hunting prey at night during the winter and feeding on fruit during the day in summer. Gagorik adds, "Knowledge of these relationships will allow us to better predict the behavioral responses of both species to environmental change, as well as generate new knowledge on fox and skunk ecology." (Calypso Gagorik, email communication). 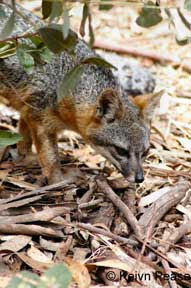 Previous data has shown that foxes occupy a flexible niche within the island community. They possess the ability to take advantage of the various habitat types, which make up the Channel Islands. On the other hand, the island spotted skunk may have a more specialized niche driven by fox activity.

Friends of the Island Fox is committed to research that will expand understanding of island fox biology and behavior. The more we know about island foxes the better we will ensure a future for both species.

"Examining temporal niche and movement patterns of the island fox (Urocyon littoralis) and the island spotted skunk (Spilogale gracilis amphiala) on Santa Cruz Island, CA" was investigated by Calypso Gagorik and Victor Zhang in conjunction with Northern Arizona University and under the supervision of The Nature Conservancy.

FIF is accepting applications for our 2021 Research Grant thru August 31, 2021

Applications for Friends of the Island Fox's 2021 Research Grant are now available. 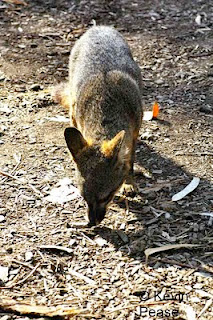 Part of FIF's mission is to support research that will help build scientific understanding of island fox biology, health, behavior, ecology, and any aspect that influences the species' long-term survival.

FIF welcomes applications for the $5,000 available in research funding.

Applications will be accepted through August 31, 2021


Your donations to Friends of the Island Fox 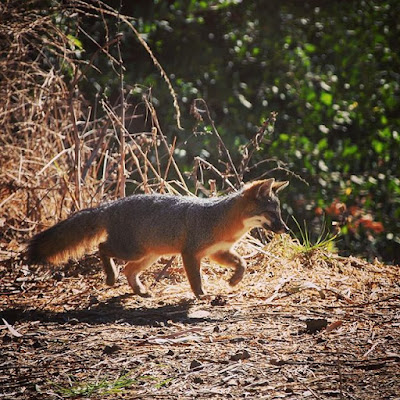 Friends of the Island Fox is migrating! 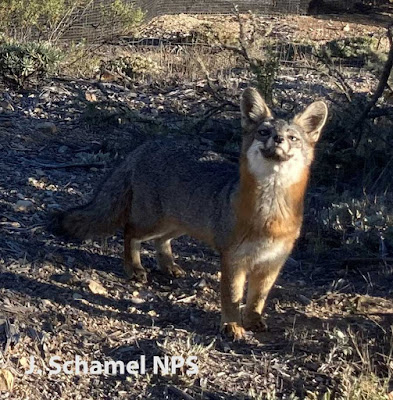 FIF has been on Facebook since April 2011. We've changed, Facebook has changed, and island foxes on Santa Rosa Island have gone from a population of 449 to an estimated 2,427.

We want to keep telling you about island fox conservation successes!

The old page will no longer be updated.

We're expanding our horizons, just like this island fox spotted last week on a mountain top on Santa Rosa Island. 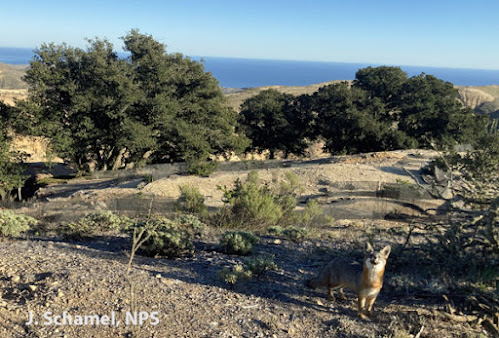 Spread the news to your friends.

DeCandia wrote "I wanted to let you know that microbiome samples from all six islands have arrived on the east coast :)" Swabs taken from island foxes during health checks have been transferred to a lab in Washington D.C. She added, "I'm very much looking forward to the next steps of this research!" 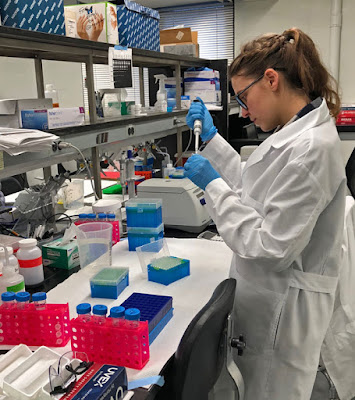 FIF's Research Grant is funding the DNA analysis of the swabs to get a picture of the biodiversity of microbes living on and in island foxes.

What Is She Looking For?

DeCandia's research is cutting edge science. Her early analysis of Catalina Island foxes led to some important findings on the possible relationships between bacteria in island fox ear canals and a tendency toward extreme immune system response to ear mites. This next stage of research builds on that work.

Maintaining healthy island foxes across the islands requires greater in depth understanding of their health, diet, position in the ecosystem, and interactions with other species, including humans.

Friends of the Island Fox invests in research to invest in the island fox's future. Applications for the FIF 2021 Research Grant will be available April 15, 2021.