The annual meeting of the Island Fox Conservation Working Group in 2015 reported that the general status of the six subspecies of California's Channel Island foxes is GOOD.

However, four of six islands saw dips or declines in population in 2014. The historic drought and its impacts on food resources is believed to be the cause. Biologists on Santa Catalina have documented a direct connection between rainfall levels and island fox reproduction. Years with drought-level precipitation result in reduced plant food and prey, thereby causing fewer island fox pups to be born or to survive. The extent of drought impact varies significantly by island.

Despite the drought, recovery of the four endangered subspecies of island fox has been very successful and this spring (March 2015), the US Fish and Wildlife Service (USFWS) announced initiation of a status review of the four subspecies.

Introduced disease continues to threaten all island foxes and a lack of canine distemper virus (CDV) vaccine safe for use in island foxes has been a major concern for two years. The Working Group took urgent steps, and Friends of the Island Fox participated, to determine the effectiveness of a newly available CDV vaccine.

All island fox subspecies are maintaining stable populations and there are no issues which put any Channel Island fox subspecies in eminent threat of extinction. The continuing drought, however, has more severely impacted island foxes on San Miguel and San Nicolas Islands. As seen in the past, each island faces its own concerns and challenges. 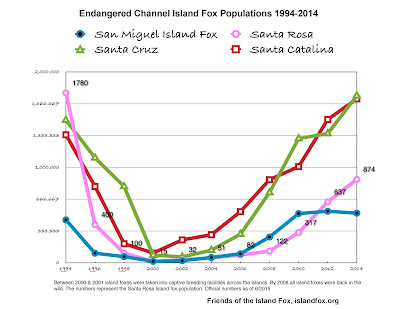 Concerns:
Healthy plant and animal populations fluctuate normally with available resources. Recovered island fox populations naturally dip when there is not enough food, water, or territory. There is a natural limit to the number of island foxes an island can support, also known as carrying capacity.

Low rainfall has impacted food resources across the Channel Islands. However, islands have not been impacted equally. Some islands appear to have greater natural drought tolerance.

The island-fox-diet study pointed out that island foxes on San Miguel and San Nicolas Islands were dependent on plant and invertebrate species which had been introduced to their islands, replacing native plant habitat.  Unfortunately, these introduced plant species, especially, ice plant, and the non-native creatures that live in it–snails and earwigs, have declined dramatically during the last two years of extreme drought. The impact has been greatest on San Nicolas Island where average island-fox weight has declined and the population has dropped 41% since 2012. 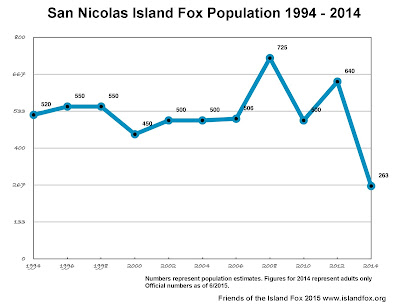 Restoring native vegetation is the best long term solution for healthy island fox populations on these two islands. (for more on this topic, see the Island Fox Update 2015 pdf document above)

A secondary impact of the drought has been increased complications with parasites. Changes in diet and decreased general health leave island foxes more vulnerable to internal and external parasites. Here again, each island has its own specific parasite challenges. (See Island Fox Update 2015 pdf for details) (Spiny-headed worm on San Miguel Island first detected in 2013).

Introduced disease continues to pose a threat to all island foxes, especially on islands visited by people. Dogs, cats, and introduced species, like raccoons, are all avenues for disease to be transported to isolated and disease-naive island foxes. Efforts to verify the effectiveness of a new CDV vaccine for island foxes is currently underway.

Positive Notes:
There are early anecdotal signs that the small amount of rain this spring and summer may be improving resources on the islands. More island fox pups have been spotted this summer than during the last two summers. However, the official impact on the populations will not be known until counting begins in fall.

Monitoring with radio collars continues to provide important information to land managers. Radio collars have helped verify that no golden eagles have returned to eat island foxes on the northern islands. Radio collars were instrumental in determining the cause of island-fox decline on San Nicolas Island. And they continue to provide early warning of disease introduction. Radio monitoring collars will also enable land managers to ethically determine the effectiveness of the new CDV vaccine.

‘Fox-Saver’ bins on Santa Catalina and the Navy's education outreach on San Clemente are all helping to reduce the number of island foxes hit and killed by cars.

Thank you to the Island Fox Conservation Working Group and all of the important work that has helped island foxes recover from the brink of extinction. Thank you also to the many participants on our June Santa Cruz Island Trip that have allowed us to show you their photographs.
Posted by Friends of the Island Fox at Wednesday, July 29, 2015 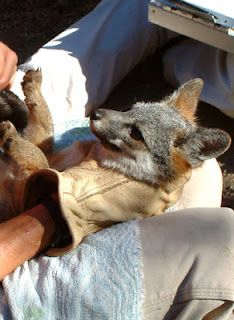 At the Island Fox Conservation Working Group meeting on June 16th, we learned of a serious threat looming over Channel Island foxes. The Canine Distemper virus (CDV) is highly contagious and deadly to these small canines. It nearly caused the Catalina Island fox's extinction in 1999.

Since that emergency, Channel Island foxes have been vaccinated for CDV with a specific vaccine designed for ferrets. Unfortunately, the vaccine has not been produced for two years. Island land managers have only been able to use vaccine they had on hand, leaving the majority of island foxes unprotected for the last two years.

A new CDV vaccine has recently become available, however it is unclear whether it will be effective for island foxes. There is great urgency to test the new vaccine before fall counting and health check season. This is the only time when a large number of island foxes are handled by biologists on all islands.

As part of an emergency effort to verify the effectiveness of the new CDV vaccination, five island foxes will be tested on each island. Each of these individuals, which have never been vaccinated for distemper before, will be caught, blood tested, vaccinated with the new vaccine, radio-collared, and released.

These radio-collared individuals will be caught again a month later and their blood will be tested to verify that they have built-up antibodies against the disease. ID microchips and records on each animal enable biologists to know which island foxes can participate in this test.

This is an extra unexpected cost for each island. Friends of the Island Fox committed to quickly fund:

Thanks to the participants on our Santa Cruz Island Trip and generous private donors, we have provided these important funds.

The vaccine is currently being tested across the islands. If the new CDV vaccine provides protection to Channel Island foxes, we may be raising money for vaccinations to protect as many individuals as possible this fall.

Your support helped us to pledge this important financial commitment. Thank You to all of our conservation supporters.
Posted by Friends of the Island Fox at Tuesday, July 14, 2015

The island foxes on Santa Cruz Island have made a strong recovery. A baby boom of foxes occurred on Santa Cruz between the fall count in 2007 and 2009. The population jumped from 350 to 1,200. Adult survivorship has been very high, which means we are seeing an increasing number of island foxes between the ages of 5 and 8 years old. These are mature individuals. Island foxes are believed to be in their prime between 2-5 years of age and are estimated to live 8-10 years in the wild.

This trip two elderly animals were noticeable by their broken-down ears and minor injuries to legs and tails. These injuries were most likely inflicted by younger adult island foxes protecting territory. The campground offers an area where infirm animals can potentially find resources, while having some protection from other foxes.

We observed this older island fox lying down on the ground between campsites where people were active at tables. His coloring camouflaged him well in the dappled shade. 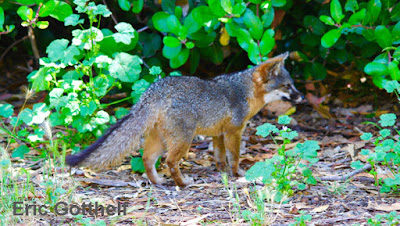 When some campers left their site, a healthy adult island fox checked out their table area. We watched as the slightly larger, but older animal, approached. We didn’t know what to expect.

However, when the older fox got within five feet of the table area, it lowered its head submissively to the younger animal. The younger fox did not chase the older animal or show aggression, yet it physically communicated to the older fox not to approach any closer. Without any direct contact, the older fox was sent off into the bushes.

We saw 8 - 10 adult island foxes (none were radio-collared individuals).

We watched island foxes searching for food, retrieving figs, and eating them (Check out the video by Douglas Welch). (The fox jumps up into a shrub at ~2:48) A large percentage of the Santa Cruz Island fox’s diet is fruit.

We’ll have more on the status of the Santa Cruz Island fox in an upcoming Island-by-Island Update. At the Island Fox Conservation Working Group meeting, biologists from The Nature Conservancy reported that a female island fox, born during captive breeding on Santa Cruz, recently passed away at age 12. She is the oldest wild island fox scientifically documented on Santa Cruz Island. Biologists were able to accurately date her age and follow her life because of her ID microchip. 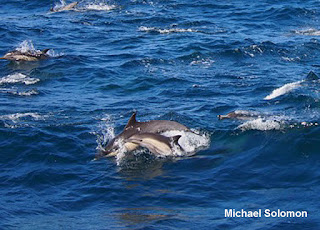 We also had a fantastic encounter with common dolphins on our boat ride home. Hundreds of these colorful dolphins were feeding and swimming right next to us. Look closely and you will see a youngster swimming beside its mother. We saw numerous young dolphins.  (Video of the common dolphins by Douglas Welch).

More photos of the Friends of the Island Fox Trip to Santa Cruz Island:
A special thank you to trip participants Eric Gotthelf, Douglas Welch, Michael Solomon and Daniel Mekonnen for their photos.