"Carrying capacity" is a term used in biology to describe when a habitat has reached the maximum population of a specific species that can be supported by the habitat's resources.

Think of a table with a platter of cookies. If there are more cookies than people, individuals will recruit others to enjoy the cookies; the population at the table increases. If there is just one cookie for each person, carrying capacity has been reached. If there are more people than cookies the table has exceeded its carrying capacity. People who need cookies will have to leave the table and go to another habitat; there aren't enough resources to support the larger human population.

Seeing three island foxes in such close proximity, as in the image above, is unusual.  A unique weather situation provided unusual resources. 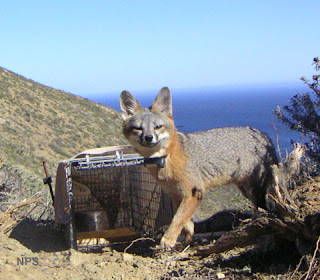 Because island foxes live on islands, they are definitively confined to the resources of their habitats. They can not migrate to another location when resources or climate become challenging. Carrying capacity, however, isn't a strict number. The Channel Islands are wild natural places and island resources vary from year-to-year depending on rainfall and weather. 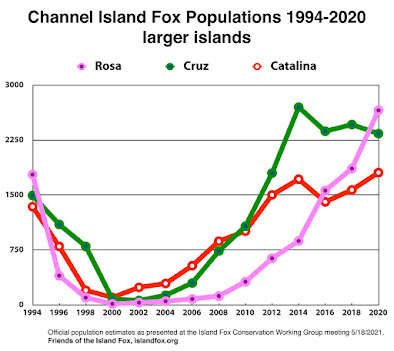 Island foxes on Santa Rosa Island (pink line, in graph) have been increasing as they recovered from near extinction twenty-two years ago. In 2021, biologists documented the first estimated decrease in the Santa Rosa Island fox population. (Official 2021 population numbers will be available later this month.) This could be signally that the population estimate of 2,657 in 2020 was a larger population than the island's resources could actually support. 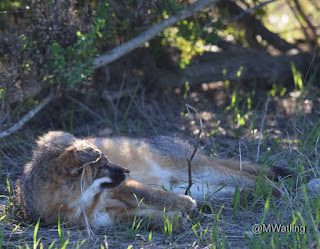 How does the population adjust down? Older island foxes (8–10 years old) may have a more difficult time surviving. They may be pushed out of their established territory by younger foxes.

In addition, reproduction can slow down, decreasing the natural population replacement of individuals. We know that very few pups were documented on Santa Rosa Island in 2021. 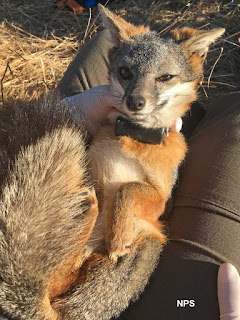 This female fox on Santa Rosa Island (right), identified as F257, was captured in 2019 as pup and then again in 2020 and 2021. At two years old, F257 is in her breeding prime, but she has yet to produce pups. This most likely is in response to limited resources.

Santa Rosa Island was extremely dry in 2021. Canines are adapted to produce offspring in balance with the amount of available resources. A female island fox with lots of food resources can produce five pups in her annual litter, but if there aren't enough resources or available territorial space to keep pups safe, her body can reabsorb embryos and give birth to no pups.

Carrying capacity can sound ominous, but it doesn't mean that island foxes will experience a die-off event because they have reached a specific population number. 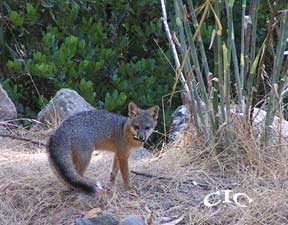 If we look at Catalina Island (red line, in graph above), we can see that the island foxes on Catalina reached carrying capacity around 2013–2014. A healthy population on this island appears to be between 1,800 and 2,200 island foxes. During years of normal rainfall, resources increase and so do island foxes. Drought years, like the winter of 2015–2016, can result in natural fox fatalities and less reproduction. The population gradually adjusts down. When normal rainfall returns, the population rebounds. This is the natural fluctuation expected in a wild population. 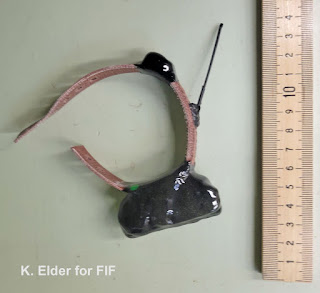 Now that the Santa Rosa Island fox population is at a high and has potentially reached carrying capacity, 2022 is the perfect time to re-evaluate territory-size and fox movement to access various island resources. Collecting GPS tracking data this summer will provide valuable data on territory, the current interactions between individual foxes, and how they access resources in their habitat.

FIF is also taking applications for the FIF 2022 Research Grant.