Is That An Island Fox? Identifying North American Foxes 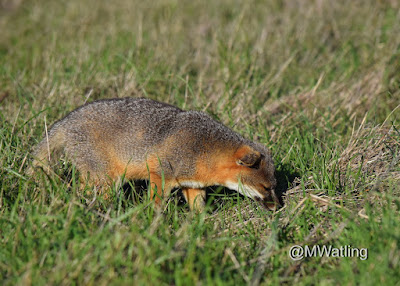 Fox species overlap in many parts of North America, which can make it difficult to distinguish one species from the next. In California alone, there are four fox species:

The last three occur only on the mainland. If you are fortunate to see a small to medium canid in the field, you should ask yourself a few questions to aid in identification: 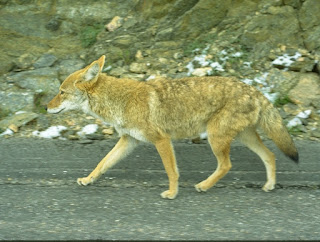 Coyotes now inhabit most of North America, but they are typically larger than foxes and appear more dog-like with a larger face. The coyote tail is also shorter for their body than a fox's. While most foxes have distinct color markings to aid in identification, coyotes do not.

2. Start with the tip of the tail: 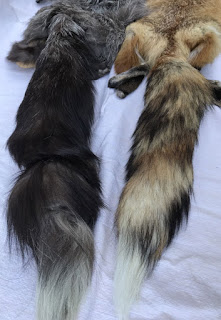 The silver fox is a color phase of the red fox (Vulpes vulpes). Most foxes used in the fur trade are red foxes. They are bred for various colorations. (FIF's red fox pelts are used in education. The silver fox pelt was rescued from a 1940s coat and the wild red fox was a car strike victim in 2005.)

With a black stripe all the way down the back - you are looking at a gray fox. (If you are on the Channel Islands, it's an island fox.)

The Gemini foxes, the kit fox and the swift fox, seldom overlap in range. If you are located in parts of New Mexico and adjacent parts of Texas, big ears will separate the kit fox from the swift fox. In general, understanding the habitat where you see the fox will provide a clue as to the species you're observing.

Arctic foxes are easy to identify by their white coat in winter or their compact body size with small rounded ears and no contrasting marks on the tail.

Use this downloadable Identifying the Foxes of North America chart to help you know your local foxes. 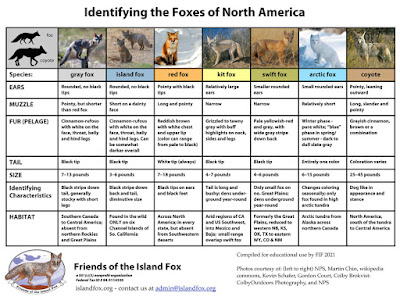 In this series of posts, we only touched the basics for each of the species covered. A list of research used in writing this project can be found at the end of each post. These resources are a great starting point for more information about the foxes that may live in your area. In addition, reading the abstracts of research articles provides wonderful insights into the latest information regarding a particular species. While the thought of wading through heavy scientist language may make your head spin, the abstract's concise language will slow that spin, allowing you the opportunity to glean useful information to assist in the better understanding of the fox you're interested in. It will also help sort fox fact from fiction.

Thank you to FIF Board Members - Mike Watling and Lara Brenner for this series on North American Foxes.


In previous posts we've introduced the red fox, the most widely distributed land carnivore on the planet, kit and swift foxes (the Gemini foxes), who inhabit the arid regions of North America, and the arctic fox, a true species of the north. In this installment of Foxes of North America, we conclude with the progenitor to the island fox: the gray fox.

As we've previously discussed on the Friends of the Island Fox website, the island fox descended from the gray fox (the island fox's "progenitor" or ancestor) between 7,000–9,000 years ago. In evolutionary time, that's relatively recent. When you examine the canid family tree, you'll find that the gray fox and its predecessors have been continuously inhabiting southern North America and Central America since the middle Miocene (10 million years ago). The genus Urocyon is the most primitive living canine lineage, closest to the origin of all canid species.

Gray Fox: The Fox of the Forest

Gray foxes are commonly associated with deciduous or mixed coniferous forests. In contrast to the red fox, which prefers forest openings–meadows and farmlands–the gray fox prefers the cover of woodlands. Forested habitats allow this inconspicuous fox to elude predators in a most unusual way for a canid: it climbs trees! 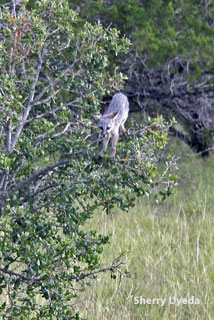 One set of traits retained from the gray fox's early divergence from other carnivores, (and one that other canids have lost) are its highly re-curved, semi-retractable claws and rotating forearms. These feline-like qualities allow a gray fox to hug trees much the same way a cat does. The gray fox's relatively short leg to body ratio lowers its center of gravity, aiding in balance and making it easier to use trees as a means of escape and to forage for bird eggs and fruits. (Island foxes have inherited this climbing ability.)

Found from southern Canada to northern Columbia and Venezuela, the gray fox is the only fox species to range across both North and South America. Gray foxes are absent from the northern plains and Rockies, as their short legs make it difficult to navigate areas with deep snow. In Southern Canada, gray foxes live in coniferous forests, where dense foliage may help mitigate the effects of heavy snowfall.

The scientific name for gray foxes, Urocyon cinereoargentus, breaks down as follows: Urocyon is Greek for "tailed dog" and cinereoargentus translates to "silvery gray," which accurately describes this handsomely dappled fox. (Island fox's scientific name.) Its underside is a cinnamon-rufous color and there is white fur on the face, throat, belly and hind legs. The tail has a black tip, which helps distinguish it from the red fox, whose tail is white tipped. There are distinct black spots on either side of the muzzle. The long bushy tail makes the gray fox appear larger than it really is. In general, they stand about 14 inches at the shoulder; weigh from 7–13 pounds and are 31–44 inches long from head to tail. (Compare to the island fox)

The gray fox is the most omnivorous of the wild canids. Just like the island fox, their varied diet consists of small mammals, birds, fruits, nuts and invertebrates such as Jerusalem crickets and grasshoppers. Their diet varies throughout the year based on prey availability, which allows them to adapt to changing environments.

While mostly solitary, gray foxes do spend time in pairs or in small family groups through out the year. More than any other fox species, gray foxes can be seen allogrooming, which is when individuals socially groom each other and their pups to remove ticks and pests. If you visit a Channel Island, you can see that this trait has been carried over to island foxes, as they are often observed grooming each other.

The gray fox's tendency to prefer areas with thick tree coverage makes this elusive species the least studied of the North American foxes. Overall, the gray fox population is healthy, and habitat loss doesn't appear to be impacting the species for now. Farmers who raise poultry feel that gray foxes are pests, but biologists claim this threat is overstated. On the contrary, gray foxes provide a benefit to humans by keeping rodent populations in check.

Indigenous peoples realized the value of their neighbor the gray fox and thus began a relationship that would lead to the evolution of the island fox.

Comparing the Island Fox and the Arctic Fox; The Fox of the Tundra

In this installment of Foxes of North America, we'll look at the Arctic Fox. While the island fox lives on coastal islands that rarely experience a hint of snow, the arctic fox is a true species of the North and has adaptations that help it survive the harsh conditions of the polar regions.

Arctic Fox; The Fox of the Tundra

To survive extremely low temperatures that regularly reach -50 degrees F, the arctic fox has thick fur with two undercoats. This adaptation provides excellent insulation. (Compare to the island fox's fur.) A short muzzle, short ears and legs, as well as a rounded, compact body with a big bushy tail, also reduce heat loss. Arctic foxes have a special counter-circulating blood system that acts as a heat exchanger to cool, rather than warm, the blood flowing to their feet. Having cooler blood at their feet means less heat will be lost to the surrounding surfaces, thus requiring less energy for the fox to stay warm in frigid temperatures. In the summer, arctic foxes shed their long white coat and instead grow short, dark gray to bluish-brown fur.

The scientific name for the arctic fox is Vulpes lagopus. Vulpus is Latin for fox, while lagopus is Greek for "hairy foot". This is an accurate description of the fox's thickly furred pawpads; a trait also characteristic of rabbits and hares.

The tundra ecosystem has a simplified food web, because not many species can survive the harshness of the winters. For that reason, the diet of the arctic fox is less diverse than that of other fox species. Arctic foxes are capable predators of small prey, such as lemmings and voles. Individuals living along the coast take advantage of seabird populations, hunting birds and eggs. They also forage other available marine resources. Arctic foxes frequently follow polar bears and scavenge their leftover scraps. Arctic foxes are comfortable foraging on the pack ice as well. These winter weather foxes use the permafrost as a natural refrigerator to cache food in years of abundance for times when food is scarce.

Arctic foxes pair up in February and March and mate in April, which is late compared to their southern canid counterparts. (Island fox pups are born in April.) Arctic fox kits are typically born in May or June. They can have as many as 19 pups in a single litter. Extremely large litters of up to 22 kits have been observed. That's the largest litter size in order Carnivora! However, the average number of pups varies by local prey abundance and geographical area. More typical litter sizes for arctic foxes are 6–9 pups in inland areas and 3–6 pups in coastal populations. To handle such large litters, female arctic foxes have evolved 12–14 teats. Arctic foxes use dens primarily during the pup season (like island foxes). They build their dens in sandy soils where they can dig 2–3 feet before reaching the permafrost. Arctic foxes also make snow dens during blizzard conditions.

The fox of the tundra is an elegant creature that has adapted to survive in extremely cold environments. Arctic fox populations in North America are healthy and stable, so this species is not listed as threatened or endangered. That doesn't mean the foxes are without challenges. Red foxes have been expanding their range northward as a result of the warming climate, driving the arctic fox deeper into the polar regions. When red foxes encroach on arctic fox territory, the more aggressive red fox wins out. The extreme conditions of the northernmost arctic regions may limit the range expansion of the red fox, thus giving the arctic fox its best chance for long-term survival.

In the final installment of Foxes of North America, we will concluded with the progenitor of the island fox, the gray fox.