Island foxes are found on six of the eight Channel Islands off the coast of southern California. (Where does the island fox live? What is an island fox? Experiencing Santa Cruz Island )

A pair of San Clemente island foxes at the Santa Barbara Zoo. (Where can you see an island fox?)


Island foxes all have similar lifestyles and habits:

But the foxes on each island are slightly different from each other. The differences are great enough that each island has its own subspecies of island fox. 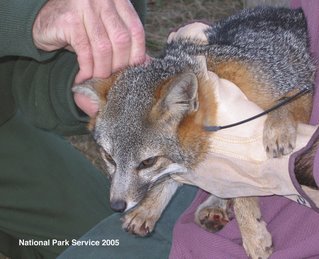 A San Miguel island fox being fitted for a radio collar. 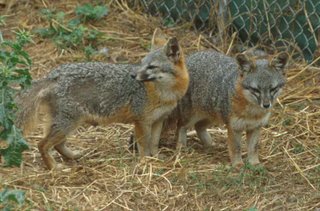 Tail length is a specific physical trait that varies between the different subspecies. Studies show island foxes from different islands have more or less tail vertebra.

In descending order:
Between the shortest-tailed island foxes on San Miguel Island and the longest tailed on San Nicolas Island there is a difference of 7 vertebra. Interestingly, Schoenherr, Feldmeth and Emerson point out in Natural History of the Islands of California (Univ. of California Press 1999) that the island foxes on San Nicolas Island appear to have the least amount of genetic diversity. This suggests the San Nicolas population may be descended from as few as a single pair of foxes.

Conservation and research efforts are necessary across the islands to preserve and protect the six subspecies of island foxes.