Listen to the Fox Talk Podcast and hear an interview with biologist Tim Coonan of Channel Islands National Park and his exciting news from San Miguel Island.

Why were the San Miguel Island foxes endangered?
More about island foxes.
Captive breeding to save island foxes.
Most recent reports from all of the islands.
Posted by Friends of the Island Fox at Monday, August 20, 2007

Highlights from the Island Fox Conference 2007 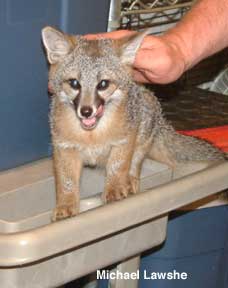 This was the ninth year people concerned with saving the island fox on the Channel Islands have come together to share information and strategies. Some are scientists and biologists working in the field, others represent conservation organizations or government agencies, but everyone has the same goal - assuring the recovery of the four endangered island fox populations and maintaining the health of the two populations on the southern islands.

Reports were provided by each of the land managers or their representatives:
Summary:
Reproduction in the wild has been very successful and endangered island fox populations continue to recover. However, golden eagle attacks reoccurred this spring threatening foxes on Santa Cruz Island. Concerns regarding disease are being raised on Santa Rosa and Santa Catalina. Wild fire appeared as a new threat, while public education became vital in helping to reduce an old threat - vehicular trauma. This past year demonstrated how fragile island fox populations are and how important it is to monitor them for the earliest signs of threats that could be catastrophic.

A Glance at the Numbers 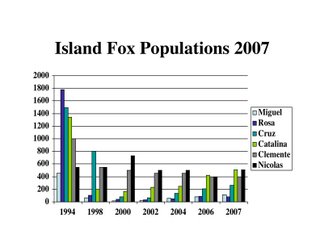 There still is a long way to go to reach normal population numbers, but island foxes are increasing in number on all islands. 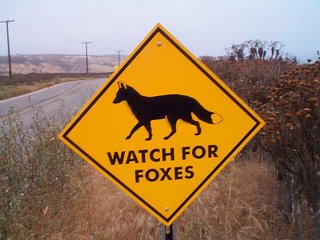 On a positive note: In previous years as many as 20-25 island foxes lost their lives to vehicular trauma. Education programs and fox-warning signs have dramatically decreased car-related fatalities. In 2007, only 2 known and 1 possible island fox death were the result of car strikes.

San Clemente Island (~450 foxes in the wild; 11 - in captivity in mainland zoos)
The territories of 71 radio-collared foxes were studied. Foxes that stayed away from roads had a greater survival rate than those that traveled along the roads. While education programs and signs have helped reduce fox deaths related to car strikes, studies are being done to see if more foxes are hit in specific areas where drivers have less visibility.

On a positive note: Fox fatalities due to cars have numbered only 6 for the first half of 2007. This is a dramatic drop from the 55 fatalities in 2005 and 35 in 2006. During this research, island foxes were observed eating prickly pear cactus fruit. A food item not previously known to be part of their diet.

In mainland Zoos, there are currently ten male island foxes and one female. Unfortunately, all offspring born in the zoos have been male. An island fox was born at the Santa Barbara Zoo April 2007. For more: see new pup and hear an update on our Fox Talk podcast.

Santa Catalina Island (~509 foxes in the wild, 1 in captivity)
The Santa Catalina population continues to recover from the near-catastrophic decline of 1999-2000 and island fox density has increased to 3.31 per square kilometer (compare that to San Nicolas Island above). New challenges to fox recovery are cancerous tumors of the ear and wild fire. The Catalina Island Conservancy is working with the Institute for Wildlife Studies (IWS) and the University of California at Davis to culture the ear mites that appear linked to cancerous ear tumors. All island foxes caught are being closely examined. It is unknown whether the ear mites are being transferred to foxes from feral cats, are specific to Catalina, are the cause of the cancer, or if inflammation caused by irritation from the mites is uniquely causing cancer in this fox subspecies. Further study is needed to understand the connection between the ear mites and the growing percentage of foxes with cancerous tumors. Currently, 44% of the population is showing signs of this disease. It is a very high percentage and analogous to the facial cancer that is threatening the Tasmanian devil.

One island fox was injured, but no island foxes are known to have perished in the wild fire that affected 10% of the island (4,750 acres). For more on the Catalina Fire. Friends of the Island Fox donated funds for radio collars for 5 foxes in the fire area including the injured female fox that was released back into the wild on July 11, 2007.

On a positive note: Over 87% of the island foxes on Santa Catalina have now been vaccinated for canine distemper. Public education and a “pet policy” for the island’s interior have helped to decrease the number of island foxes being killed by domestic dogs. Ten roadside fox-warning signs and a speed-feedback machine in a high fox-density area have helped reduce fox fatalities due to car strikes to just 5 for the first half of 2007. The City of Avalon has formed an Animal Task Force to actively address the feral cat population. New GPS tracking collars are being tried on 10 foxes in the burn area and 10 outside of the burn area to track day-to-day movement.

On a positive note: All 5,036 feral pigs on Santa Cruz Island appear to have been removed; there has been no sign of a pig since January 2007. Without the food source provided by the pigs there will be less motivation for the golden eagle to stay on the island. Captive breeding of island foxes will continue on Santa Cruz and more releases are hoped to occur later in the year.

Santa Rosa Island (total ~40 foxes in the wild; 37 in captivity)
Island foxes continue to be released into the wild. There have been no deaths due to golden eagles since spring 2006, but several foxes have died from unusual illnesses and injuries from other foxes. The National Park Service plans to maintain 12 individuals at a breeding facility for several more years, but will be releasing the others.

On a positive note: Foxes in the wild on Santa Rosa have been reproducing at high rates.

San Miguel Island (80 foxes in the wild; 2 in captivity)
From the most endangered population, with only 15 surviving individuals, the island foxes on San Miguel are making a strong recovery. In November 2006, 16 foxes were released back into the wild. Watch one of the fox releases on San Miguel Island. Foxes as young as one year old are becoming parents, resulting in 32 pups being born in the wild in 2006. There have been no fox deaths caused by golden eagles in 16 months.

On a positive note: Because the San Miguel Island foxes are doing so well in the wild, ALL releasable individuals will be returned to the wild. (Two elderly females will be cared for at the breeding facility.) The last captive San Miguel Island fox is scheduled to be released July 31, 2007. This marks a milestone in helping this population recover from near extinction. Stay tuned for our next Fox Talk and report on the release from Tim Coonan.

- In 2006, the greatest survival threat to the island fox was vehicular trauma. 35% of known island fox deaths last year were car related. The efforts to reduce incidents with cars are vitally important.

- Monitoring island foxes in the wild is imperative to maintaining healthy populations and the ability of biologists to respond quickly to fox survival threats, whether those threats are introduced predators or disease. Radio telemetry collars are being placed on as many island foxes as possible. Other monitoring methods were also discussed:
To read the complete Summary of the “NINTH ANNUAL MEETING ISLAND FOX WORKING GROUP” with access to some of the participants presentations go to http://californiaislands.org/_wsn/page3.html

For more on how YOU CAN HELP THE ISLAND FOX.