Not All Foxes Are The Same - Red Fox vs. Island Fox

Foxes are small- to medium-sized members of the dog family that are found throughout the world. In North America there are six species of fox: Red Fox, Gray Fox, Kit Fox, Swift Fox, Arctic Fox, and of course, the Island Fox. Foxes are the smallest of the North American wild canids, the others being wolves and coyotes. Foxes are very intelligent and adaptable. They occupy varying landscapes across the continent from the vast Arctic tundra to the desert scrub land of the American southwest. From the wind-swept prairies to the boreal forests, the foxes of North America have carved out a niche as specially adapted predators of small prey.

In the first of a multi-part post on different foxes, we'll introduce you to the Red Fox.

Life on the Edge: Red Fox

The red fox is the most widely distributed land carnivore on the planet, with a range covering more than 28 million square miles. By contrast, the San Miguel Island fox has a very small range: only 24 square miles. Red foxes occupy five of the seven continents, including Australia, where they were introduced by English settlers in the 1800's. Only South America and Antarctica are free from these adaptable animals.

The scientific name for the red fox is Vulpes vulpes, the "fox's fox," which is fitting since most people conjure up an image of the red fox when asked about foxes. (Island fox's scientific name.) The presence of red foxes all over the world has led to their appearance in pop culture and folklore as people are readily drawn to this beautiful and cunning creature. More than any other canid, the red fox has received positive representation in literature and film. Aesop's Fables contain numerous tales of foxes. Disney's The Fox and the Hound tells the story of two unlikely friends, a red fox named Tod and a dog named Copper. To indigenous tribes of North America, the fox is a spiritual animal with different meanings across cultures–from a clever trickster to being associated with intelligence and wisdom.

Red foxes are the largest of the North American fox species, with a long, bushy tail, a narrow pointed muzzle, and thick soft fur. Their legs are slender with black fur covering the feet, nose, and the back of their erect, pointed ears. The coat of the upper body, head, and tail are bright red to yellowish-red. The tip of the tail is white. Adults are approximately 36–42 inches in total length and their tail accounts for slightly more than one-third of their length. Most adults weigh 10–11 pounds, as much as three times the size of an island fox.

Red foxes prefer habitat along edge environments where two habitat types meet, such as the intersection of open meadows and woodlands. In the west, red foxes are primarily found in higher, sub-alpine elevations. In California there are two native sub-species, the Sierra Nevada red fox and the newly described Sacramento Valley red fox. These two native red fox populations are small and geographically isolated (like being on an island). The study of island fox populations has played an important role in helping biologists evaluate the vulnerability of these red foxes to survive into the future. 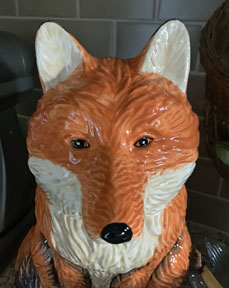 Red foxes thrive near human settlements, most likely due to the protections humans provide against the foxes main predators: coyotes, bears, and mountain lions.

Red foxes are primarily active at twilight and night, although they may be seen during the day when foraging to feed their young. While omnivorous, their diet consists primarily of rodents, including voles, pocket gophers, and deer mice, as well as cottontail rabbits, jackrabbits, and snowshoe hairs. Like island foxes, red foxes readily eat fruits when they are in season. In some areas, fruits make up 100% of their diet! They commonly consume blueberries, blackberries, and raspberries, as well as apples, grapes, and even acorns.

Like many canids, North American foxes are basically monogamous, and the red fox is no different. Mating occurs between December and April. Pups are born between April and May. (Similar to island foxes.) The typical litter size is 3–6 pups. The male initially participates in feeding and rearing the kits, but moves on as the kits mature.

Red foxes are an adaptable and successful species. They have been extensively studied and their populations are stable apart from the two California sub-species. These beautiful animals extrude the cuddle factor more than any other fox species. (Well, except maybe island foxes.)

Coming up next: Gemini Foxes: Kit Fox and Swift Fox;

Posted by Friends of the Island Fox at Friday, February 19, 2021