Island Fox M152 Has a History 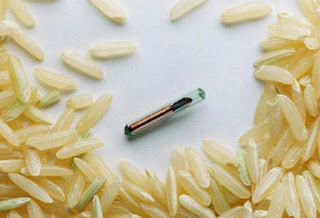 Each island fox counted across the Channel Islands during summer/fall monitoring is a documented individual. They each receive a microchip tag (or PIT tag) like your dog or cat. Why is that important? Why does FIF help fund ID microchips?

When island fox M152 received his radio collar this fall, he already had a documented history.

- He was living in the same area four years ago, which tells us that he is an adult male with an established territory in this location. Seven pups were seen in this same area in 2018. There is a good possibility that M152 is their father or grandfather. DNA comparison of blood samples could document their relationship. A blood sample was taken from M152. 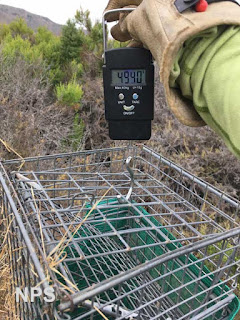 
- What has made the difference in M152's weight? Is he just eating better this year or is he eating a different diet than in 2014? Four years ago, a whisker sample was taken from M152. This year a whisker sample was collected again. Friends of the Island Fox has funded a Research Grant to evaluate these whisker samples. Whiskers record what the fox has been eating over a four to six month period. Isotopes from the food items, prey or plant matter, are laid down in the whisker as it grows out. M152 may help us learn what an island fox needs to eat to be healthy and successfully parent pups.