Friends of the Island Fox is happy to announce:


Juliann Schamel is the recipient of the first FIF Research Grant

Schamel is a Biological Science Technician at Channel Islands National Park and the $5,000 grant will help fund research on "The Channel Island Food Web–A Decade of Dietary Resource Use in Channel Island Fox: Implications for Reproduction, Recruitment, and Resilience in a Changing Climate."

It's a big title reflecting the broad range of important data that may be revealed.

Schamel's work will build on important past research.

In 2009, researchers collected island fox scat samples to look at seasonal diet across all six islands. Their 2014 paper revealed diet varied from island to island and included a higher frequency of insects and fruit than expected. They cautioned that islands with poor native plant diversity offered fewer food options for island foxes in the event of drought.

While scat successfully reveals visual items, (insect exoskeletons, cactus fruit skin and seeds), it may not visually capture everything in the fox's diet. Also, scat data is limited to recording diet in an individual over a short time period, a few days. 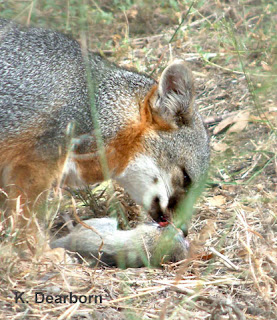 You are what you eat. Food items (prey and plant) have their own isotope fingerprint. Carbon and nitrogen isotopes consumed by the fox are laid down in the hair shaft documenting an individual's diet over months.

Since 2010, biologists have been gathering whisker samples from individual island foxes during health checks on the northern islands. These samples have been cataloged by year and with individual fox identification.

FIF is excited to support Schamel's research using whiskers because it has the potential to: 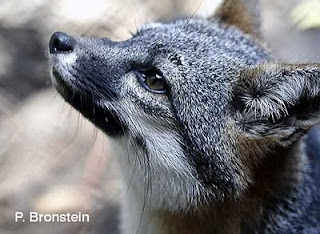 Whiskers are amazing! Not only do they offer an opportunity to invest in greater knowledge about the secret lives of island foxes, whiskers grow back and their collection is non-invasive.

FIF will be bringing you more on Juliann Schamel and her research as her work progresses.

Thank you to all of the 2018 grant applicants for sharing your research goals with FIF. There is so much more to learn about island fox health, behavior, and interactions with other species.

Posted by Friends of the Island Fox at Friday, September 21, 2018