We started with a goal of 250 microchips and with your help
we funded 500!

That means 500 young island foxes captured during annual counting this fall will receive microchips that will identify those individual animals for the rest of their lives.

Why are microchips so important to the conservation of the endangered island fox?

By scanning each microchip while the fox is still in the trap and checking the data we can limit the amount of time, or occurrences, that an animal is handled by humans by immediately releasing foxes that have already been captured that year. They [microchips] also support our ability to make sure each fox receives the necessary vaccines and in the proper doses. Proper identification of each fox is probably the most important aspect of our recovery and research efforts.

Microchips provide information across the life of an individual island fox, like “Burnie Boots.” Burnie’s Story

Because individual animals can be quickly identified, we now understand that male island fox pups tend to disperse as far as possible from their parents’ territory, while females tend to stay near by. On Catalina Island there is a small isthmus between the large part of the island and a small area to the northwest. Few island foxes venture across the isthmus and it was thought they were males dispersing to find territory. However, a microchip helped researchers identify a trailblazing female that also made the journey. 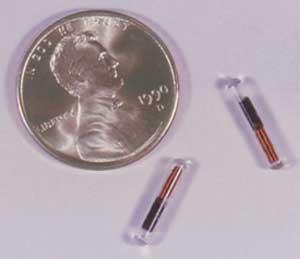 How does a passive identification tag or microchip work?

Each microchip costs $10 but the investment in island fox conservation is priceless.
Posted by Friends of the Island Fox at Tuesday, September 17, 2013