What Do Island Foxes Eat? 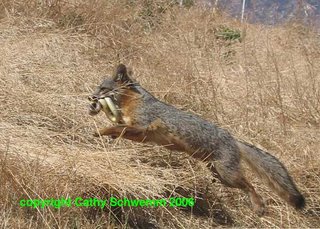 Biologists took this picture in June of a fox on Santa Cruz Island with a western yellow-bellied racer in its mouth. The snake probably provided a filling meal for the fox and its pups. 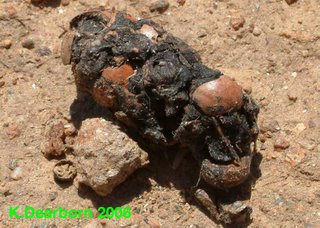 Despite its small size (4 - 5 lb.), the island fox is a formidable hunter. It is the largest native mammal predator on the California Channel Islands. While deer mice are a favorite, birds, snakes, lizards, crabs and insects are also eaten. Island foxes will also opportunistically forage for plant foods and scavenge for carrion.

This scat sample contains seeds from a Catalina Island cherry. The island fox must have dined on this native island fruit. 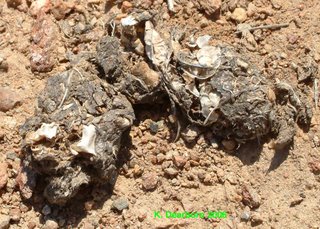 While this scat sample shows fur and bones from deer mice. These scat samples were found four feet from each other and demonstrate the variety in the island fox’s diet.

As a solitary hunter the island fox uses stealth. It moves silently through the island vegetation on padded feet. The large upright ears listen for prey, while the moist nose searches for scent. 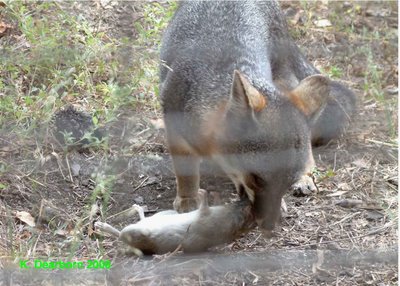 This island fox on Santa Catalina Island attacked her prey swiftly and silently. The black rat was very large in comparison to the tiny female fox, but the determined predator pounced without a second thought and quickly subdued her rodent prey. Starting at the head, she ate the entire carcass, including bones and fur. Only the tail was left behind.

Though small in stature the island fox is vital to the natural balance on its island home. Foxes play an important role in stabilizing rodent and insect populations and even in dispersing the seeds of some plants. As the top predator on the Channel Islands, a healthly island fox population is vital to a balanced and healthy island ecosystem.
Posted by Friends of the Island Fox at Monday, August 21, 2006