The island fox may be a small animal but it has many friends.
With island foxes living on six of the Channel Islands, a wide range of people and organizations are involved in assuring their recovery from endangered status on the northern islands and maintaining their populations on the southern islands.

Reports on the current status were provided by each of the land managers:
This has been a good year for the island fox. Populations appear stable or increasing, and with the exception of Santa Catalina Island, there is no evidence of widespread disease.

Foxes on the Northern islands are reproducing well in the wild. Most released females had pups this spring, helping to dramatically increase fox numbers on Santa Cruz Island.

Foxes in the captive breeding programs are reproducing less. Hormone and stress level research over the past year was unable to identify any specific reasons for this decline in fertility. The island fox appears to be different from other foxes regarding reproduction. More research is needed to understand how best to manage sustained successful reproduction in captivity.

The last known breeding pair of golden eagles were removed from Santa Cruz Island on 6/21 and 6/22/06. This wily raptor pair has eluded capture for several years, but the two golden eagles were finally caught with net guns released from a low-flying helicopter. The two eagles have been fitted with radio transmitters and will be released in Northern California. Their chick has been taken to San Diego for fostering. A few immature golden eagles may still reside on the northern islands, but this is a huge step forward in making the islands safe (link) for foxes released back into the wild.

This is the fifth and final year for bald eagle releases on the northern islands. To date ~60 juvenile bald eagles have been released. Two bald eagle chicks were hatched by released birds and are being successfully raised by their first-time parents on Santa Cruz Island. This is a positive step toward the reestablishment of bald eagles on the northern islands. You can observe one of the island eagle families as they occasionaly return to the nest at www.iws.org/nestcam.htm

The island fox population continues to recover from the virus, believed to be canine distemper, that swept through the population in 1999-2000. Over 80% of the foxes on the island have now been vaccinated for the disease.

Ear mites, possibly transmitted from feral domestic cats, are currently causing tumors in the ear canals of 30% of the Catalina island foxes. These tumors appear to gradually become cancerous and 20% of the general population has this form of cancer. The causes and ramifications of this trend are yet unknown, but concern for the situation is growing. The majority of the foxes in captivity on Santa Catalina Island are individuals receiving health care.

Domestic dogs running loose have also been responsible for the death of several foxes. The Catalina Conservancy is trying to educate the public on Catalina Island and a new Pet Policy requiring domestic pets be contained has been implemented for the interior of the island.

Southern Islands:
New studies are proposed to more precisely determine the fox population on San Clemente Island. This will help the Navy monitor fox numbers and needs. The population on San Nicolas Island is regularly monitored and believed to be stable at ~400 foxes. On both islands steps are being taken to reduce fox fatalities from car strikes. 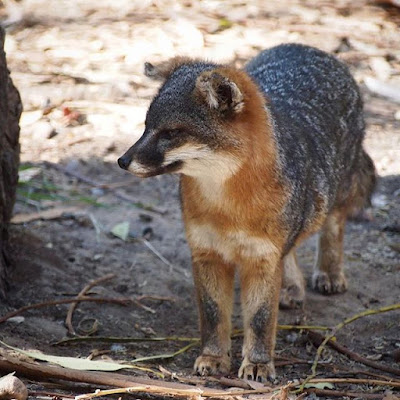