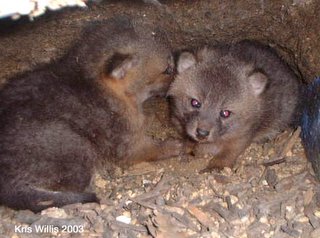 When island fox populations dropped to dangerously low numbers on the northern Channel Islands and Santa Catalina Island, foxes were captured and brought into protective captivity with the hope they would reproduce.

Captive breeding allows endangered animal populations a chance to recover while protected from predators or the environmental threat that caused their decline. The captive situation also allows wild animals to receive medical care and guaranteed nourishment they would not normally have.

On Santa Catalina Island, the Catalina Conservancy’s captive breeding facility allowed the island foxes to increase their numbers safe from the distemper virus. By the fall of 2004, enough foxes had been produced in captivity to increase the population to a stable number and all of the captive foxes were released back into the wild.

Captive breeding has also been successful on Santa Rosa and Santa Cruz Islands. You can get the latest update on fox status across the northern Channel Islands at the NPS Fox Home Page.
Posted by Friends of the Island Fox at Monday, January 09, 2006