Friends of the Island Fox , Inc. is proud to announce a gift of 10 radio collars to the island fox conservation efforts on the northern islands of San Miguel, Santa Rosa, and Santa Cruz.

As captive breeding successfully increases the number of foxes on the northern islands, there will be opportunities for more foxes to be released back into the wild. In addition, more fox pups are being born in the wild to parents that have been released. But each of these foxes has a special need – a radio collar. 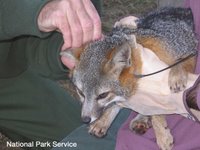 Fox being radio collared for release.

The radio collar allows biologists to monitor these tiny canines in the wild. A radio signal that indicates a fox has stopped moving is the first indication of an animal in need or who has fallen victim to predation by a golden eagle. The earlier biologists can identify a specific threat from golden eagles, the earlier they can take action to protect foxes or recapture individuals in danger.

Though radio collars can now last up to three years, each is a costly investment – $250 per collar.

Join us in our efforts to invest in the future for the island fox and make radio collars available for each island fox that has the opportunity to return to the wild. Your donation can make a difference for the island fox.
Posted by Friends of the Island Fox at Monday, January 16, 2006