A San Miguel Island Fox Gets A Radio Tracking Collar 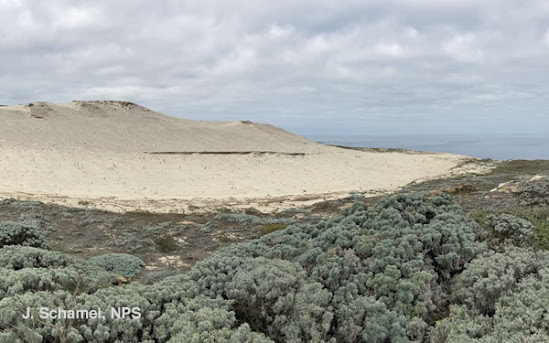 This fall during fox counting, a young male island fox was captured in this area of dunes and sage. Few pups were captured in 2021 on any of the Channel Islands; continued drought conditions reduced available food resources resulting in fewer pups being born. 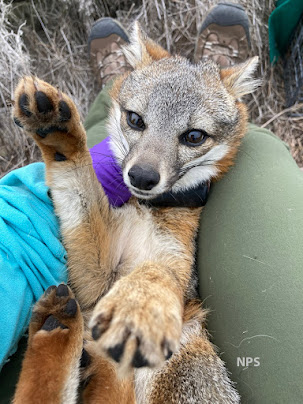 Male M515 is one of the few island fox pups documented in 2021. Following his health check, he was fitted with a radio-tracking collar funded by Friends of the Island Fox. This radio collar will enable biologists to monitor his survival and track his movement.

As a young adult, M515 has yet to establish his territory. Will he stay in this dune area or roam to more shrubby parts of the island?

Will he stay close to the coastline or will he find a home in the island's interior? Which area will provide the greatest quantity and quality of resources? How large of a territory will he patrol? These are important questions that researchers are trying to answer.

Young male island foxes are on the move in autumn and winter. Is his priority finding a territory or a mate? We don't really know. As a youngster, however, he will have competition for territory from other males. The population of island foxes on San Miguel Island was estimated at 277 individuals in 2020. (2021 population estimates are currently being calculated.) Because the current population is down from an estimated high of 453 in 2019 (an average rainfall year), M515 may have an easier time finding a territory of his own.

His island is a beautiful, if rugged place to live. If he's lucky, winter rains will bring renewed plant growth and prey species. He might find a mate and father pups before his first birthday in April.

Through it all, his radio collar will allow biologists to track his survival and see where he ends up on the island. If you donated to Friends of the Island Fox - M515 might be wearing a collar you helped provide!

Posted by Friends of the Island Fox at Wednesday, December 15, 2021