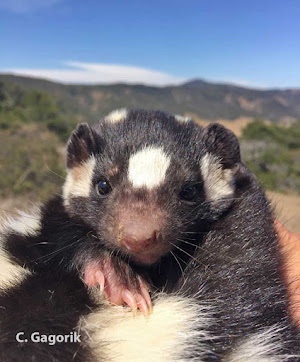 On the California Channel Islands, the island fox (Urocyon littoralis) has been hypothesized to compete with the smaller-bodied island spotted skunk (Spilogale gracilis amphiala). Recent declines in spotted skunk captures have led to concerns on population viability and what role the foxes may have played in the decline. 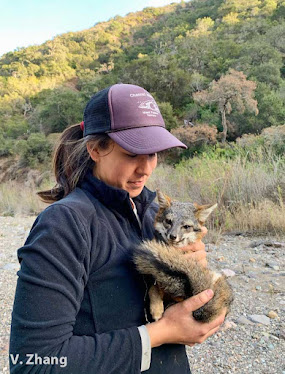 From 2018–2019, we GPS and VHF collared foxes and spotted skunks living on Santa Cruz Island to assess space use and deployed remote cameras to examine interactions between the two species at spotted skunk den sites. We also explored monitoring tools for spotted skunk detection with emphasis on remote camera placement and use of scent stations.

We found fox and spotted skunk seasonal home ranges were much larger than previously reported on Santa Cruz Island and spotted skunks moved around the landscape differently compared to foxes. 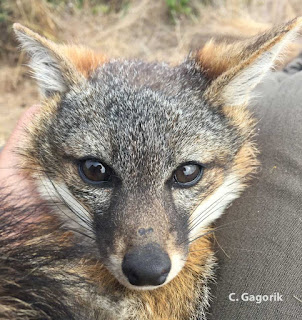 Spotted skunks showed restricted movement, using less than 50% of their home range over shorter time periods such as a week or month. Foxed moved widely through the landscape covering more than 50% of their home range over the course of a week. During this time, we collected the first photo evidence that foxes may be disturbing resting sites of spotted skunks during the day. We also found that remote cameras placed on drainage bottoms may be more effective in detecting skunks. We discourage the use of scents at camera stations as foxes appear to be monopolizing the stations by repeated marking. 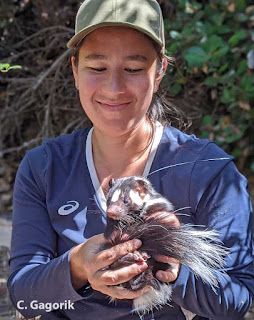 Our knowledge and understanding of spotted skunk ecology are still limited due to the many challenges of studying a cryptic species. We encourage further studies be conducted on spotted skunks, particularly focusing on interactions of foxes and spotted skunks at den sites.

Friends of the Island Fox provided financial assistance to this research project.