Distemper Virus on the Rise in California Winter 2020 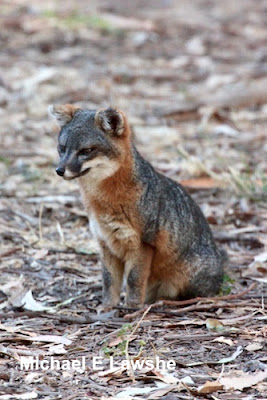 Wildlife veterinarian Dr. Deana Clifford, a longtime island fox advocate and member of the Island Fox Conservation Working Group, was on the radio for the US Fish & Wildlife (USFWS) warning about the rise of canine distemper virus in California this winter.

2019 was a good year for wildlife, including island foxes. On the mainland, raccoon, striped skunk, and gray fox populations have all increased. (The gray fox is the ancestor of the island fox.) State wildlife agencies are also seeing an increase of canine distemper virus (CDV) among these species. Distemper is the dog equivalent of measles–it impacts the neurological and respiratory system, is highly contagious, and can be deadly to pet dogs and wild animals.

The collapse of the Santa Catalina Island fox population in 1998 was caused by a wild raccoon carrying CDV that was transported to the island. The introduction of distemper from this one raccoon nearly wiped out the Catalina Island fox.

Ideally, between 100 and 300 island foxes are vaccinated against CDV and rabies on each island. This ensures that if an introduction of distemper occurs at least a minimal number of island foxes might survive. Distemper is highly fatal among island foxes. On Santa Cruz Island, it means 100 would survive, but approximately 2,000 island foxes would perish.

Introduced disease is the primary threat to island fox survival. This is why monitoring is so important and why FIF helps fund radio collars and health checks.


The USFWS and Friends of the Island Fox urge you to
protect your pets, wildlife, and the island fox.


Vaccinate your pets against the canine distemper virus (CDV).

Posted by Friends of the Island Fox at Monday, February 17, 2020