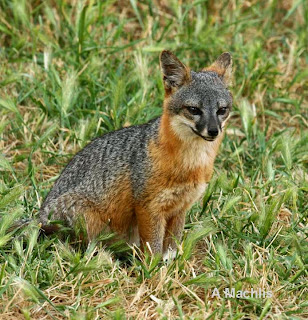 Besides being adorable, why should we care about the island fox?

You probably know the story of the island foxes–that they suffered great population declines in the last two and a half decades. Over three years the northern islands’ fox populations declined 96-99% due to hyperpredation by goldeneagles. (In other words, unusually large numbers of island foxes were killed for food by golden eagles.) At the same time, on the eastern end of Santa Catalina Island there was a 90% population decrease in one year due to a canine distemper virus outbreak.

Fortunately, rigorous captive breeding programs were swiftly and effectively put in place to save the foxes from sure extinction on some of the islands. Island fox estimates as of 2014 show substantial population recovery. A conservation success story! This is great news for the stability of the Channel Island ecosystem, but should we declare victory and stop worrying about the foxes?

Foxes are continually facing health threats such as those caused by introduced species. Known health concerns in the island fox populations include a number of viruses, bacteria, and fungi that cause diseases. On Catalina, earmites in the foxes often lead to ear tumors. And a new pathogen, a spiny worm, is currently causing fox fatalities on San Miguel.

It is difficult to know when another outbreak like the one on Santa Catalina Island will occur, what the next pathogen will be, or how much genetic diversity will be lost. So it’s important that the fox populations are monitored for the presence of known pathogens and the emergence of new ones. Monitoring for pathogens can be easily done by non-invasive sampling, which allows useful animal material to be collected while causing the least amount of stress on the animal. Therefore, I am monitoring pathogens in fox populations by collecting scat samples, a smelly but non-invasive sampling technique.


I received scat samples from all of the six inhabited islands as well as from captive foxes in zoos. I extracted all available DNA out of the scat samples including that from the fox, bacteria, fungi, and fox prey. Then I sequenced 16S rRNA, a common gene that can differentiate among species. I am currently processing the sequences from the scat samples and comparing them to known pathogen sequences in order to identify putative or possible pathogens.

I will then compare the genetic diversity of a gene family associated with the immune system (major histocompatibility complex II) to the diversity of organisms found in the scat to better understand the current diversity of the immunity genes in the Channel Island fox and how this affects the health of individuals.

The complex population history, combined with ongoing health issues, contribute to the need for conservation of the island foxes. I look forward to sharing my results and conclusions and potentially informing the management practice of these curious critters.


Nicole Adams is a Graduate Student at the University of Southern California in Los Angeles, CA.