Tani represents all of the juvenile island foxes that were born this spring (A special Island fox is Born).  As summer turns to autumn these young island foxes will venture off from their parents to begin their own lives. But before they do, they just might have a close encounter of the human kind. 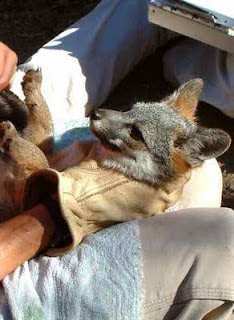 Across the California Channel Islands biologists are catching island foxes in capture cages to count their numbers, replace and outfit radio tracking collars, and conduct annual health checks.
For young island foxes that means a microchip that will identify them for life. It may also mean vaccinations for canine diseases - rabies and distemper. Both of these diseases have a high mortality rate, meaning that most wild island foxes would die if they encountered them. We know this is true because the Santa Catalina Island population of island foxes declined by over 88% between 1998 and 2000 when distemper was introduced to the island. (More about Catalina Island).
Pet dogs and cats that have not been vaccinated can introduce disease to wild populations. Island species like the island fox are especially vulnerable because they have not evolved with the same diseases that animals may be exposed to on the mainland. Wild animals from the mainland can also introduce disease to island populations (see Raccoon on Catalina).
The land managers across the islands hope to vaccinate at least 60-80 island foxes on each island this autumn. The minimum (60 foxes on 6 islands) would be a total of 360 island foxes with a cost of $10 per fox. Just providing minimal disease protection to this endangered species comes with a minimum cost of $3,600.
You can help provide a young island fox heading out into the world with a better chance of survival by supporting vaccination costs. A donation of $10 will protect an island fox from rabies and distemper.
You can also make a positive difference by reminding friends and family that vaccinating pet dogs and cats helps protect wild animals. Disease has no sympathy, it can attack an endangered species or a beloved pet. To keep both safe, pets should stay home and leave wild animals to live in their native habitats.


See more of Tani's adventures on Facebook and @ifoxtweet on Twitter.
Posted by Friends of the Island Fox at Tuesday, August 23, 2011