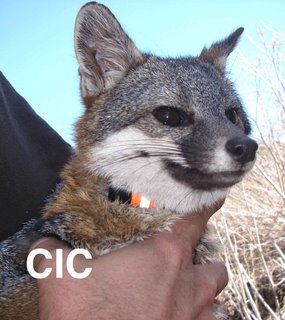 As the good news of higher island fox populations is coming in from across the California Channel Islands, the crisis of extinction seems to be past. The challenge of the future comes in monitoring recovering populations.

To that end, Friends of the Island Fox is proud to announce the funding of our 33rd radio tracking collar. This collar will go on a fox on Santa Catalina Island and be monitored by the biologists with the Catalina Island Conservancy.

Radio tracking collars have proved to be the best way to monitor large segments of the island fox population. Whether biologists are on the ground tracking the “beep” with a hand-held antenna, flying over in a small plane, or reading data from an automated system, the radio collar on the individual island fox provides valuable information.


Each collared island fox is an important link in a vital monitoring network.
Each radio collar costs $250.
Your donations have helped to fund 33 radio tracking collars. Thank you for helping to make a positive difference.
Posted by Friends of the Island Fox at Friday, January 30, 2009