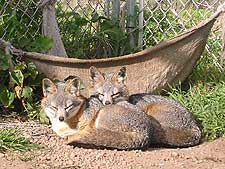 Are you contemplating romance and Valentine’s Day? So are the island foxes. The cold blustery days from December to February are the perfect season for California’s Channel Island foxes to pair up and settle down in a cozy den.

During autumn, island fox families tend to split up. The youngsters, now over six months old, head off on their own and the parents take a vacation from family life and each other. With the arrival of winter, the monogamous mates come back together. (About the island fox)

Island foxes make their dens in a sheltered location, sometimes underground, in a tree stump or in amongst dense undergrowth. The male and female establish a territory around their den site and settle down to finding food for a family.

A few island foxes born last spring, will also be out looking for a mate. Even though they are less than a year old, some will become parents this spring. Because population numbers are still far below normal on San Miguel, Santa Rosa, Santa Cruz and Santa Catalina Islands, island foxes are breeding younger and having more offspring than they usually would. The abundance of island deer mice and other food items makes it possible for a pair of island foxes to raise five pups instead of the typical two or three.

Captive breeding programs saved the island foxes from extinction on both of these islands, but human matchmakers are never as good as the foxes themselves. We can all hope that this year there will be an increased number of island fox pups born on San Miguel and Santa Cruz Islands.

Eleven of the island foxes released in Channel Islands National Park are wearing radio-tracking collars funded through donations to Friends of the Island Fox. (radio collars)

Pups born in the spring and foxes slated for release from the captive breeding facility on Santa Rosa Island will soon be needing there own radio tracking collars. Your donation to Friends of the Island Fox helps to provide radio tracking collars vital to monitoring the recovery of endangered island foxes. You can donate through the PayPal and Cause for Good buttons in the upper right .

This Valentine’s Day give a truly romantic gift.
Help support a solution.
Working together we can SAVE the island fox.
Posted by Friends of the Island Fox at Thursday, February 07, 2008