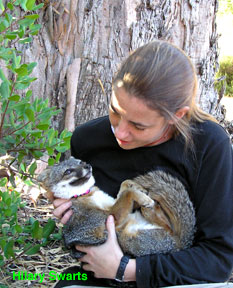 Hilary in the field on Santa Cruz Island with one of the oldest collared females, A3Y. (Photo by Jessica Sanchez)

“You can kind of see her collar ID colors: Pink, White, Pink, Pink. That's how we identify the foxes photographed by remote cameras. Annoyingly, it doesn't work all the time. This female just got her newly painted collar in mid October.” - Hilary

Hilary Swarts, a PhD candidate at the University of California at Davis, is studying the behavioral response of the island fox to golden eagles, a predator to which foxes are not adapted. Her theory is that foxes, which are naturally active during the day (diurnal), have possibly changed their behavior in response to predation pressures from golden eagles. Eagles also hunt during the day, so foxes may be responding by being more active at night (nocturnal). Specifically, the research is investigating whether behavior patterns of foxes on Santa Cruz Island have changed in the period since the 1990’s when golden eagles colonized that island. If foxes have changed their behavior, this shift may be a selection- or learning-based response to predation by golden eagles, or it may be a response to reduced fox density.

Hilary’s research will examine several aspects of island fox ecology including reproductive success, changes in population abundance in response to different levels of predation, daytime activity levels in the absence of predation, and will compare measures of daytime activity to the risk of predation. The results from her research will contribute scientifically to the understanding of the effects of invasions on behavioral ecology, while also providing crucial information to resource managers on the risks of golden eagle predation to the Santa Cruz Island fox population.


FIF plans to fund future island fox research. You can help with your donation to Friends of the Island Fox, Inc. To donate use the PayPal or Network for Good buttons in the upper right corner.

For more on Santa Cruz Island and the island fox:

Posted by Friends of the Island Fox at Wednesday, January 17, 2007