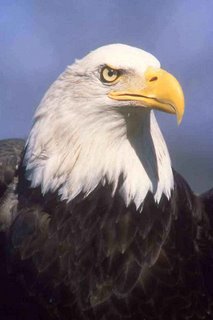 In March biologists spotted a bald eagle nest with an egg, on Santa Cruz Island.

On Wednesday, April 12, 2006, the egg hatched and the first bald eagle chick since 1949 chirpped to its parents on one of California’s northern Channel Islands. This is very exciting news not only for the bald eagle, but also for the island fox.

Bald eagles and island foxes lived together amicably on the Channel Islands for thousands of years. The bald eagle preyed primarily on fish, sea birds, and carrion, while the omnivorous fox hunted the islands’ small rodents, insects, and birds, and also foraged for a variety of native fruit. The two predators each had their own niche and played an important role in maintaining balance in the island ecosystem.

The delicate balance, however, was destroyed when the chemical insecticide DDT (dichlorodiphenyltrichloroethane) entered the marine food chain. Small sea life absorbed the DDT, they were eaten by fish, who in turn were eaten by the bald eagles. High levels of DDT in the bald eagles caused them to lay eggs with thin shells that cracked when the parents tried to hatch them.

The last successful bald eagle chick on the northern Channel Islands hatched on Anacapa in 1949.

With the hatching of this first youngster in April 2006, there is hope bald eagles will once again be able to make the northern Channel Islands their home. A successful return of the bald eagle would be a important step toward restoring the natural balance and making the islands safe again for the island fox.

(While bald eagles have also been reintroduced on Santa Catalina Island, DDT levels still remain high enough off Catalina that these eagles are unable to lay sufficiently-shelled eggs. On Catalina, bald eagle eggs are collected by biologists, incubated, and the chicks are then returned to the nest to be raised by their parents. Large quantities of DDT in barrels were dumped into the ocean off Palos Verdes Peninsula by Montrose Chemical Company in the 1950s and 60s. These unstable barrels continue to slowly release their toxic content into the ocean and there is no sign that bald eagles on Santa Catalina will be able to reproduce on their own for sometime into the future.)
Posted by Friends of the Island Fox at Monday, April 17, 2006